Eight people were confirmed dead from a predawn fire that sank a boat off a Southern California island and 26 others who were on the scuba diving vessel were missing, a local sheriff said.The fire broke out aboard the Conception, a 75-foot (23-metre) boat, at about 3:15 a.m. while it was moored just off the shore of Santa Cruz Island, the U.S. Coast Guard said in a statement.

UK-based engineering services company Babcock said that its liquefied gas equipment (LGE) arm has netted 26 orders in the LNG and liquefied petroleum gas (LPG) carrier markets so far this year.Having won 16 contracts in the LPG carrier market, plus a further 10 ecoSMRT contracts for LNG carriers so far in 2019, the company continues to thrive in challenging market conditions. 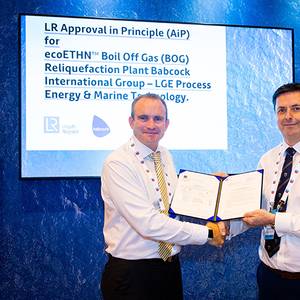 Classification society Lloyd's Register (LR) said it has awarded Babcock LGE with Approval in Principle (AiP) for a solution designed to maximize the economic transportation of ethane in very large ethane carriers (VLECs), by combining the reliquefaction and ethane fuel supply systems.

The subsea services provider to the oil and gas industry Rever Offshore, has announced the appointment of Bob Bryce to the newly-created role of Operations Director.The provider of fully integrated subsea construction and offshore management services said in a press release that  Bryce’s 40-year career in the oil and gas industry has seen him hold senior leadership positions on a global basis